Collection: The Library of Innerpeffray

The Library and School at Innerpeffray were founded by David Drummond, 3rd Lord Madertie, in around 1680. The Library was the first free public lending library in Scotland. Madertie wished the Library and School to benefit the community "in time coming" and leaving them with a legacy of 5000 Scottish Merks, charged his successors with the responsibility. After Madertie’s death the family set up a Trust Fund, the Innerpeffray Mortification, to care for the Library and School. Today the Mortification still cares for the Library, though it is now run by a Board of Governors, rather than the family. It is a Scottish Charity, SC013847. The Library continued as a lending library until 1968 and now operates as a museum.

A new Library building was commissioned by Archbishop Robert Hay Drummond who inherited the estate in the 18th century. This building still houses the Library today.

The Library collection contains books from the 16th century to the present day on a wide variety of subjects, including witchcraft, animals, farming, medicine and European history. Many of the early books from the Founder’s original library of around 400 volumes reveal him to be a man of wide interests, including history, law, politics, gardening, and the pursuits of a gentleman, such as honour and hunting, as well as religious contemplation and discussion.

Robert Hay Drummond added a considerable new collection in the 18th century. A note of 'books proposed to be bought into the Library at Innerpeffray, as occasion offers' from May 1744 shows that care was taken to acquire the latest and the best in subjects such as 'Divinity, Classicks, History' and a footnote adds: 'a list of Mathematical books to be got from some Professor'.

Innerpeffray has one of Europe's oldest surviving examples of a library borrowers' register, dating from 1747 to 1968.

The collection is miscellaneous with approximately 3500 books, the earliest dating from the fifteenth century, and the bulk deriving from the seventeenth and eighteenth centuries.  The collection is especially strong in theology, history, law and philosophy (including ‘natural philosophy’), as is to be expected of a library of the Scottish Enlightenment period.  At its core are the founder’s books (some 400 volumes) and books from the collection of Archbishop Drummond (some 1500 volumes).  One incunable, Duns Scotus  Questiones in Quattuor Libros Sententarium Venice 1476 (from The Scottish Collection); other notable holdings are The xiii. bukes of Eneados...Translatit...into Scottish metir, bi...G Douglas, London 1553; David Browne, The new invention, intituled, calligraphia... Sainct-Andrewes 1622; La Bible...Sedan 1633 (the pocket Bible of James Graham, 1st Marquis of Montrose. Also a 19th century collection including novels, travel, natural history and history.

Custodial history: The Library of Innerpeffray is run by a Board of Governors. In September 2013, a Memorandum of Agreement was signed between the Innerpeffray Library and the University of Stirling.

Accruals: There are occasional additions to the collection, most recently the donation of Mrs Janet Burns St Germain in 2013 includes an incunable: Duns Scotus 1476, the Works of James VI & I (1616), a  first edition copy of John Knox’s Historie of the Reformation of the Church of Scotland (1644), a number of David Hume first editions and a first edition of Samuel Johnson’s Journey to the Western Isles (1775), a holograph Burns poem and a first edition of the Kilmarnock edition of his Poems, Chiefly in the Scottish Dialect (1786), together with a range of other early printed, eighteenth and nineteenth century first editions relating to Scottish history and culture.

If you would like to consult books in the Innerpeffray Library, you will need to visit Innerpeffray, by Crieff, Perthshire. Visitors are welcome during opening hours:

Entrance to the Library is £7 for all adults, and free for those under 16 years. Outwith opening hours, Private Visits can be arranged, during evenings and the winter (subject to availability and weather permitting).

George Chamier, The First Light: the Story of Innerpeffray Library (2009) 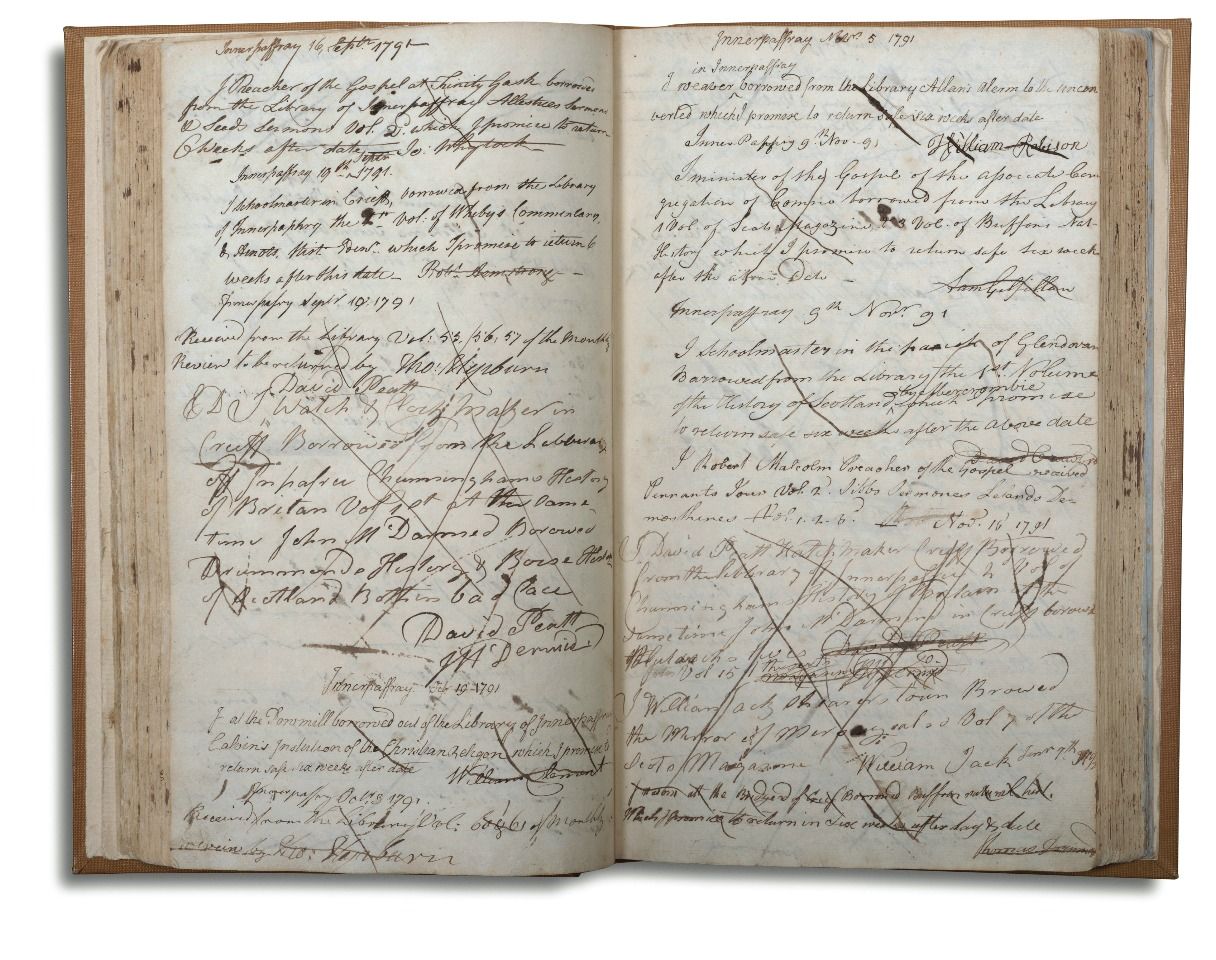 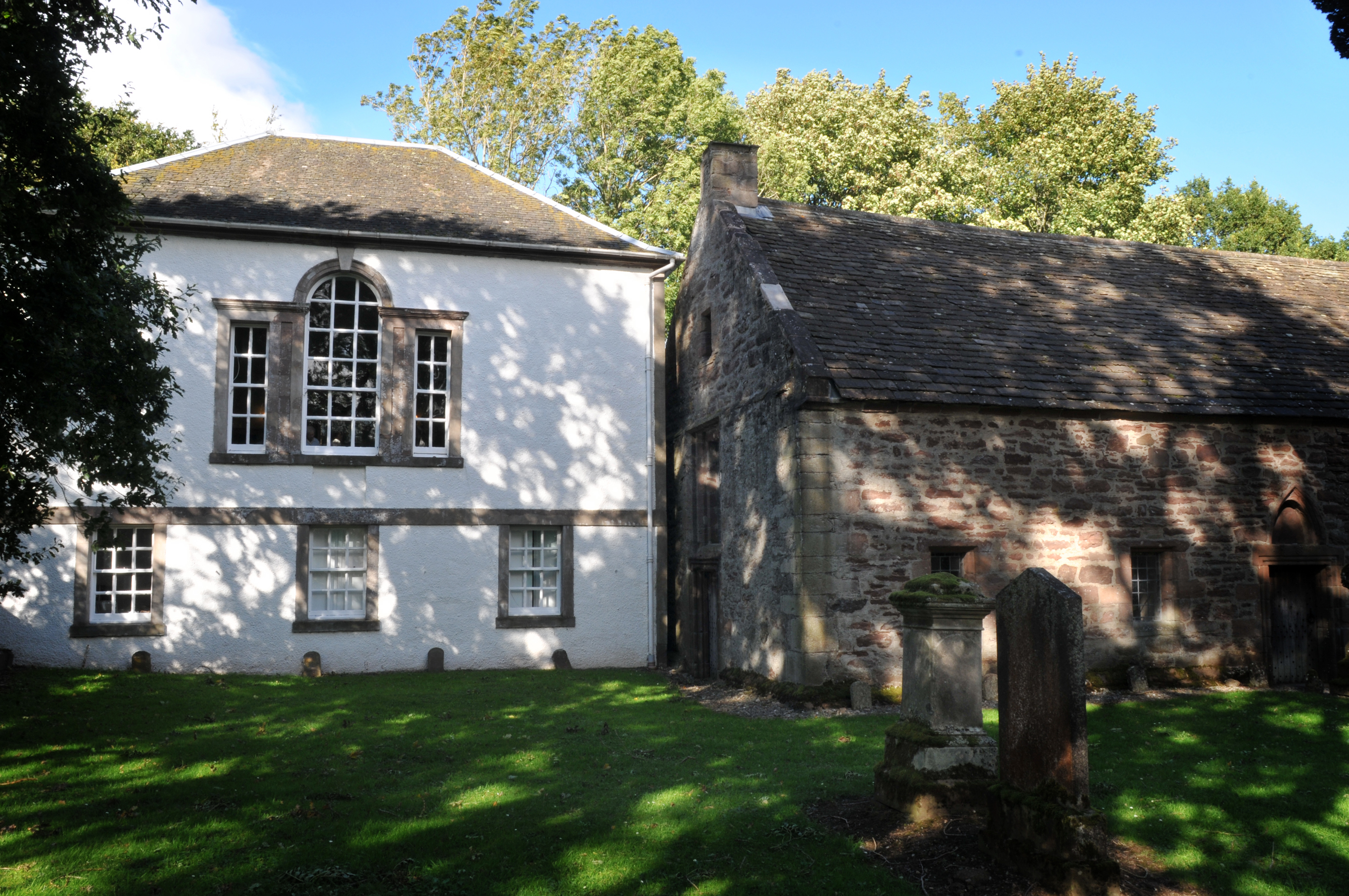 In 2011 a research project at the University of Stirling started to record and map the Borrower's register. It is planned that the full register will eventually be browsable online.