Established in 2010, the Scottish Political Archive is a project based in the university's History and Politics Department, which aims to collect material relating to modern Scottish politicians and political organisations through oral history interviews and the donation of political papers and memorabilia to the project. The archive is part of a larger project on Scottish politics and the devolution referendums of 1979 and 1997 and the forthcoming 2014 independence referendum.

Material collected by the Scottish Political Archive to date includes: oral history interviews with politicians and activists involved in the 1979 and 1997 devolution referendums; the Scots Independent Newspaper photograph collection, recording politicians and political campaigns from the 1960 to the present; the Bruce Watson collection of political pamphlets and memorabilia (Watson was Chair of the Scottish National Party from 1945-1947); material relating to the political careers of Dennis Canavan (1974-2007); George Foulkes (1975-1997); John McAllion (1988-1997); George Robertson (1965-1998) and Gordon Wilson (1962-2000).

Full details of the material catalogued to date can be found on our online catalogue.

Note: The Scottish Political Archive is interested in collecting material relating to the 1979 and 1997 devolution referendums such as leaflets, posters and photographs. We are now actively collecting material relating to the 2014 referendum. If you are involved in a Yes or No group we would be interested in hearing from you and enlisting your help to collect leaflets and photographs to chronicle this important campaign for future generations. For further information please email the Scottish Political Archive at scottishpoliticalarchive@stir.ac.uk 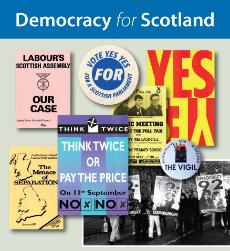 Poster for the Scottish Political Archives Democracy for Scotland exhibition which has visited Edinburgh, Stirling, Aberdeen and Dumfries in 2012.