This collection of material relating to the Jacobites was gathered by Lord Amulree (1900-1983). The Jacobites sought to restore the Stuart monarchs to the British throne after the deposing of Catholic James II in 1688 in favour of Protestant William III and Mary. The Jacobite cause was particularly strong in the Scottish Highlands and in Ireland. Exiled in Europe, the Stuarts made several attempts to sieze power in Britain. The two main risings were the First Jacobite Rising in 1715, led by Prince James Edward Stuart ('The Old Pretender') and the Second Jacobite Rising in 1745, led by Prince Charles Edward Stuart ('Bonnie Prince Charlie' or 'The Young Pretender'). Both attempts failed, the latter ending in a crushing defeat for the Jacobites at the Battle of Culloden in April 1746.

Basil Mackenzie, 2nd Baron Amulree was a doctor specialising in geriatric care and a Liberal Peer in the House of Lords. He had a lifelong interest in the Jacobites.

Contents: Manuscripts relating to the Jacobite cause in the 18th century, including a contemporary report on the Battle of Falkirk, 1746; manuscript copy of Lord Amulree's A parting gleam: the life of Archibald Cameron; articles by Lord Amulree; transcriptions from the Stuart Papers; photographs of paintings and places connected with the Stuarts; books on Jacobite history; paintings and a crayon portrait; medals; pair of paste shoe buckles.

Extent: 1 shelf of books; 7 boxes of manuscripts and objects

All of the collection is listed in the online library catalogue.

Please contact us in advance of a visit by emailing archives@stir.ac.uk.

Custodial history: The collection was bequeathed to the University by Lord Amulree in 1983.

Published research on the collection 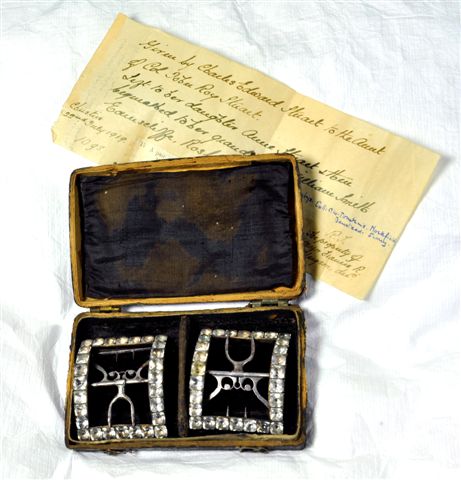 Pair of paste shoe buckles, said to have belonged to Bonnie Prince Charlie